Life has not been easy for Amina.* She has lived all of her 36 years in a vulnerable area in South Sudan's Bor county, where many years of conflict have forced families from their homes and cut them off from stable sources of food, medical care and other essentials for survival.

As if that weren't hard enough, the mother of five has also endured devastating violence in her own home.

Amina's husband of 14 years struggles with alcoholism, and when he is drunk, the couple has disagreements that often escalate into physical fights. Amina recalls many times that her husband became extremely violent, kicking her or lashing her with a stick. Amina is not sure how many times she's had to be hospitalized after such a fight, but she bears visible scars of this violence on her face, arms and legs.

In June 2019, after a particularly violent evening, Amina's neighbors heard her cries and carried her to Bor State Hospital for medical treatment. She was referred to the One Stop Center, which IMA World Health established with funding from the United Nations Population Fund (UNFPA), for more specialized treatment.

Amina spent four nights in the surgical ward at the One Stop Center, where trained health workers treated her injuries and provided her with personal care items, a solar lamp and a blanket for her care and comfort. Importantly, Amina received psychosocial support services for the first time to help her process her experiences, work towards healing and determine a way forward. During her sessions, the health workers helped her learn de-escalation tactics that she could employ the next time her husband became drunk and violent. 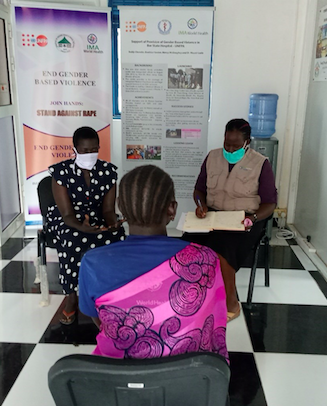 A year later, Amina reports that she has used the tactics effectively, and that her husband has not beaten her since.

She added, "My relationship with my husband has changed positively. We have become friends and he has become supportive to me. I am proud of IMA World Health."

Globally, 35 percent of women have experienced some form of physical and/or sexual violence. On November 25, the International Day for the Elimination of Violence Against Women, IMA World Health calls for the end of violence against women and girls. Read more about IMA's work to prevent and respond to SGBV here.

*Her name has been changed for her protection and privacy.