IMA World Health plays a key role in the support and development of the County Health Departments in the Upper Nile which assume the responsibly for life-saving interventions such as vaccination and net distribution. IMA World Health/Christopher Glass

The temperature hovers around 102 degrees as a truck leaves a dusty wake on the flat plains of the Upper Nile state in South Sudan.

On this day a team from the Akoka County Health Department makes their final visits of the Dry Season Campaign in the region. In this sparsely populated area, small teams travel from village to village armed with a small cooler containing vaccines and a brief case full of documents to help track those who receive the life-saving medicine.

This area, like many in the rest of the state, becomes inaccessible once the rainy season starts. This places greater importance on the Dry Season Campaign – and the small teams administering the vaccines. If a village is not reached, it could quite possibly result in the deaths of many children.

Vaccination is a critical part of advancing health in a developing setting like South Sudan. According to the WHO and UNICEF’s Immunization Summary (2007), more than 2.5 million deaths a year are prevented globally thanks to vaccination against just four diseases – diphtheria, tetanus, pertussis (DTP) and measles.

After an hour on the road, county health workers Nyanyok Thon and Nyonyjo Nyor arrive at the small village of Aree, just off the main road. Mothers bring their children from far away to gather in the shade of a large tree as the team prepares to begin administering vaccines.

The team goes to work quickly.

In some cases children received an injection in the leg; others received several drops on the tongue. In each case, Nyonyjo spoke to the mothers to gather information for their files and to better serve them in future campaigns.

In less than an hour, more than 30 children are treated and the team moves on to the next town. 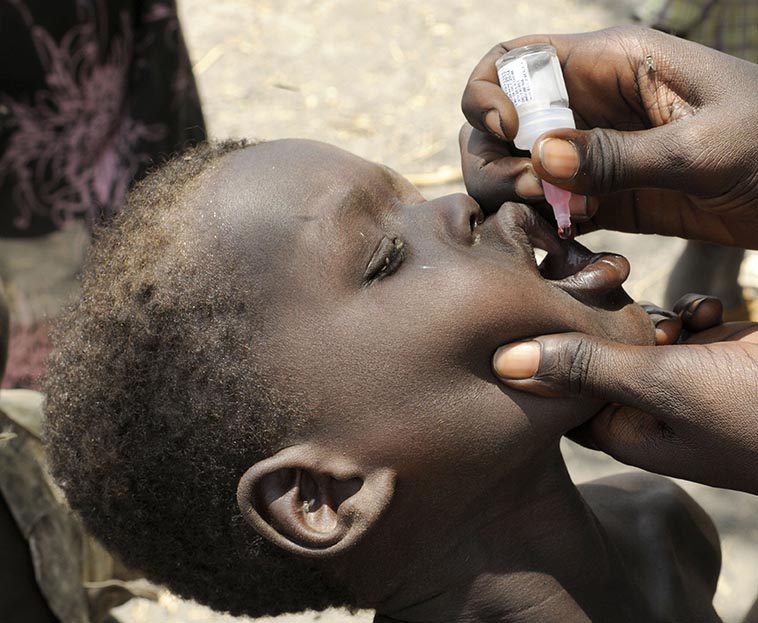 More than 200,000 vaccines were administered to children under 5 years old from February to April 2013 in the Upper Nile state of South Sudan through a partnership between IMA World Health and the Government of South Sudan.

The Dry Season Campaign in the Upper Nile state started in February 2013 and in just three months administered nearly 200,000 vaccines to children under 5 years-old (including TB, Polio, Measles, and Diphtheria Pertussis and Tetanus).

IMA World Health plays a key role in the support and development of the County Health Departments in the Upper Nile which assume the responsibly for life-saving interventions such as vaccination and net distribution.  Through the IMA managed Rapid Results Health Program medicine, supplies and training support are provided to the local health departments. The Dry Season Campaign is one element of the program.

The project is addressing immunizations, antenatal care, malaria net distribution, HIV/Aids screening and prevention, and basic emergency obstetric and neonatal services. The ultimate goal is to save the lives of those in need while building a sustainable system – complete with new infrastructure and trained health workers – that will last long into the future.