n the morning of September 30, the International Rescue Committee put out an urgent call to the World Health Organization (WHO) office in Juba, the capital of South Sudan. The UNMISS hospital serving the “protection of civilians” (POC) camp in Bor, which shelters people displaced due to conflict, had received a woman in labor with profuse bleeding. The doctors determined she needed an emergency c-section, but the hospital did not have  capacity for that level of care.

They requested urgent medevac to Juba. However, the time involved even to get a helicopter in the air from Juba, not to mention transport time, would take several hours — time the patient did not have. Meanwhile, Bor State Hospital with eight attending physicians and a newly renovated operating suite and maternity was just 10 minutes down the road.

The catch was that the woman was a Nuer, and Bor State Hospital is run by Dinkas. The ongoing conflict in South Sudan, which began in December 2013, is largely between the Dinka and Nuer tribes. Fortunately, this conflict is political in nature and does not transcend humanitarian care. When they realized a transfer to Juba was not a viable option, WHO contacted IMA World Health — the lead organization working to strengthen health care in Jonglei State through the World Bank-funded Rapid Results Health Project — requesting a way forward. IMA contacted the Medical Director at Bor State Hospital and, without hesitation, he requested that the patient be brought in.

The patient was promptly transferred the few miles to Bor State Hospital. In shock from loss of blood, she was found to have placenta previa and underwent an emergency c-section by Dr. Mabior, the attending physician in the maternity ward. The baby had died in utero before the mother arrived at the hospital, but the surgery was successful and the mother’s life was saved. The following day, with Dr. Mabior’s approval, she was transferred back to the UNMISS hospital in stable condition.

An NGO Site Manager for the POC base wrote to IMA the following day: “This morning the young lady is alert and doing well. I just want to highlight that the doctors in Bor Hospital were very cooperative and very professional. It was wonderful and humbling to see Dinka surgeons perform such skilled and careful surgery on a young lady from the POC, especially given the lack of trust the IDPs have in Bor Hospital. I think it is a very positive development, and could open the way for a new MoU between the hospital and the Health Cluster. The Medical Director (Dr. Moses) assured (us) that the IDPs are welcome at any time, that the hospital is strictly neutral, and does not tolerate violence.”

IMA is proud to support Bor State Hospital to build bridges for peace through health care in Jonglei State! 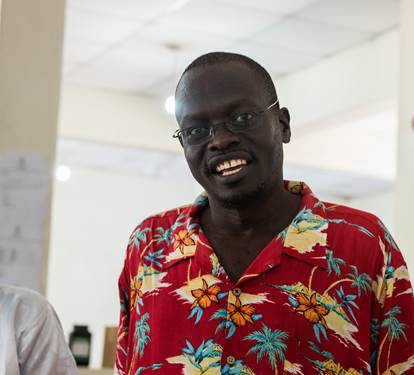