eglected tropical diseases (NTDs) like lymphatic filariasis (LF) and soil-transmitted helminthes (STH) cause immeasurable illness, suffering, and disability in Haiti, particularly among the poorest of the poor. Since 2007, U.S. Agency for International Development (USAID) has been working with the government of Haiti to reduce the burden of these diseases, primarily with support for annual drug distribution campaigns in endemic communities.

Benefitting from generous drug donations from GlaxoSmithKline (GSK) and USAID, the national program has successfully extended drug coverage to reach all 140 communes in Haiti. Even in the face of persistent political conflict and the devastating earthquake that hit the island country five years ago, the Haiti program persevered and in December 2014, received the first evidence that the program is working. Ten communes in the Southeast Department, home to more than 545,000 people, tested a representative sample of more than 1400 children (ages 5-16) for lymphatic filariasis, and not one tested positive.

“It’s encouraging to see such a positive sign,” said Dr. Abdel Direny, Senior Program Manager for IMA World Health. “This is the result of seven years of sustained effort from the government, USAID, partners, volunteers, and the communities – but the job isn’t done. Our team is looking to 2020 and the total elimination of lymphatic filariasis in Haiti which will be a truly historic achievement.”

Over the next two years, USAID will work with the Haitian government and its partners to test for lymphatic filariasis in other endemic areas to confirm that the program has been equally effective across the country. If tests reflect similar findings as seen in the Southeast Department, annual drug treatment can be stopped and Haiti will be able to declare the elimination of lymphatic filariasis by 2020.

USAID assistance is provided by partners RTI International and IMA World Health as part of the ENVISION project. Working closely with Ministry Departmental and Communal heads to conduct planning workshops and training for treatment activities, the project aims to build capacity and strengthen government ownership of program. To date, the Haiti NTD Control Program has trained over 30,000 volunteers to distribute NTD medicines, 18,000 of which with USAID funding support. In FY2014, USAID funded the treatment of more than 5.1 million people for LF and STH in 97 communes. 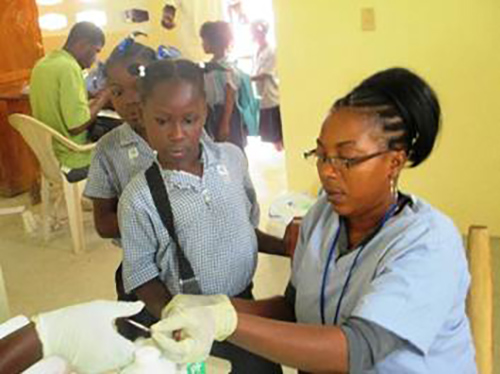