In Indonesia, around 1 out of every 3 kids under age 5 faces stunting: children who fall at least two standard deviations below median height for age. Changing behavior across the country is only part of the solution. In a country where policy reforms and budgets play out at the district level and rely heavily on community input, government buy-in is key to the success of the National Nutrition Communications Campaign project.

“One of the key things we are doing is engaging very closely and continuously with local governments,” says Iwan Hasan, IMA World Health’s team leader for Indonesia. “I cannot emphasize enough how important this part of our work is. We can only be successful at bringing stunting to the forefront if local government counterparts become our allies and partners.”

One of the goals of the NNCC project is to create a media campaign for stunting that targets different audiences. The campaign works with several media outlets to produce content, such as CNN Indonesia and Activate Media, and uses local and online media channels to spread the word.

Video on how to make complementary feeding fun

The NNCC project places advertorials in provincial newspapers to raise awareness about stunting among key decision makers who play a pivotal role in policy reform. Despite the rapid rise of new media, newspapers continue to be the most popular and influential source of information for decision makers at these levels.

In February, NNCC placed an advertorial in three provincial newspapers: Kalteng Pos, Sumatera Ekspres  and Tribune Pontiank. The ad featured an article on the link between sanitation and stunting reduction, and reached an estimated 188,800 people based on the circulation numbers of all three papers, as a way to reach district officials who might prioritize nutritional programs in their work.

Both are hosted and covered on television and radio stations, and are also geared towards policy makers, providing them with a platform to be advocates of stunting and reinforcing their commitment and accountability to the public.

Earlier this year, NNCC produced and broadcasted a total of five television and radio talk shows involving provincial and district health officials along with other experts. The project also created a series on stunting with Dr. Oz Indonesia and worked with a number of local media outlets to cover district and provincial campaign activities. 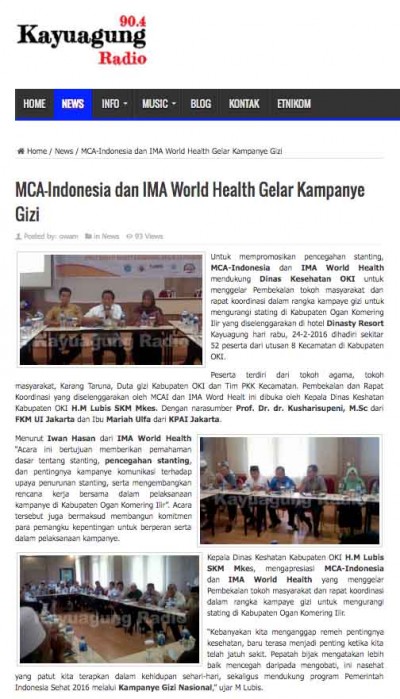 Television
Broadcast television spots target audiences nationally, aimed at females between the ages of 15-29 years who are from low-income communities that stand steep nutrition risks. Caregivers to children in at-risk communities are also targeted with nutrition-centric messages.

As of February 2016, the campaign has reached 85.4 percent of its primary audience and approximately 70 percent of its secondary target audiences. These numbers reflect the reach achieved in the first four months of the media campaign.

Video on importance of sanitation

NNCC has a digital campaign that includes advocacy videos on YouTube, web advertorials on Indonesia’s three most popular Internet news portals, and the Gizi Tinggi Prestasi website and Facebook page. The content touches on complementary feeding, sanitation, and national and international nutrition agendas. 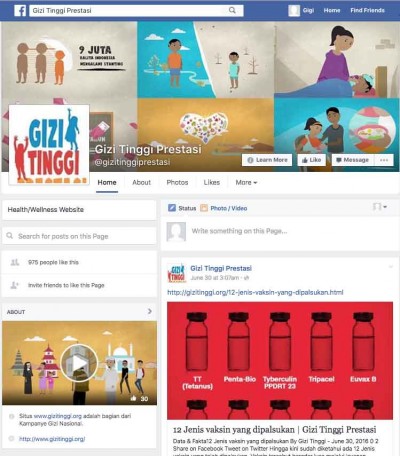 Public discussions introduce stunting issues to policy makers and other community stakeholders at the district level. This includes religious and community leaders; journalist’s trainings to help improve their understanding of stunting and sanitation issues; interpersonal communication training for caregivers; and district coordination meetings to provide a forum for different government institutions, civil society and private sectors to create better synergy among the various players.

“One of the most rewarding outcomes of the project so far is when we had an event that was opened by the Bupati (head of the district), and instead of our staff or a nutrition professor talking about the issue, he was the one who spoke to his district about the effects of stunting,” Hassan said. “He took our role and that is the kind of result we want. It means that our work has actually made a difference as the leaders of the communities are the ones who will be taking these messages to the people. When the leaders realize how big the impact of child malnutrition is, they realize that it is something they have to work on and contribute to.”