Background: Male support for partners’ antenatal care (ANC) has the potential to improve women’s care-seeking and maternal health outcomes. This study describes factors that are associated with men’s involvement in household tasks and explores the relationship between men’s help with tasks and women’s ANC-seeking, diet and workload during pregnancy as well as other health behaviors.

Methods: This study was conducted in five Lake Zone regions of Tanzania. Cross-sectional surveys were carried out among approximately 10,000 households that had children under the age of 2 years. Surveys were administered to mothers of children less than 2 years and where available, their male partners. Data were collected between December 2015 and May 2020, in conjunction with a large-scale campaign aimed at reducing childhood stunting by changing the behavior of mothers, caregivers, and decision makers. Data analysis included bivariate analysis and logistic regression modeling.

Results: Men’s engagement in household activities was significantly associated with living in an urban setting, being younger, having at least some formal schooling, early verbal interactions with their children, and male involvement in healthcare decisions. Additionally, mothers of male partners that were engaged in household activities were significantly older and more likely to have at least some secondary school education. Relative to households where men only infrequently helped out with chores or not at all, women from households where men frequently helped were significantly more likely to have taken iron tablets during pregnancy, report having eaten more than usual, lessening their household workload during their most recent pregnancy, and more likely to have played with their child in the week prior to the survey.

Conclusion: Male’s participation in household tasks is associated with a general improvement in mother’s ANC behaviors. Implicit in these findings is that general primary education for both men and women has health benefits that transcend socioeconomic class and that future interventions aimed to engage males in household tasks may target older males with less education living in rural areas. 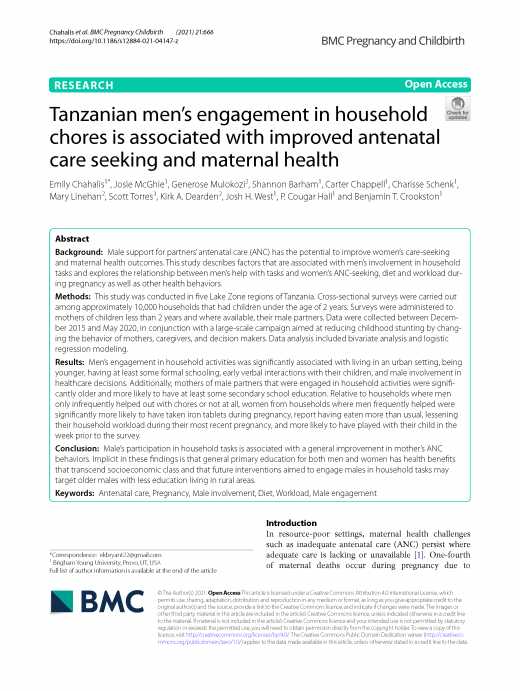