A National Communications Campaign to decrease childhood stunting in Tanzania: an analysis of the factors associated with exposure

A National Communications Campaign to decrease childhood stunting in Tanzania: an analysis of the factors associated with exposure

Childhood stunting is a major problem in Tanzania, affecting an estimated 2.7 million children under 5 years of age. The purpose of this study was to examine the factors associated with exposure to mass media (radio and television) and IPC (interpersonal communication) components integrated in a national communications campaign aiming to decrease stunting in Tanzania.

A cross-sectional survey was conducted among 3082 men and 4996 women dyads after the campaign. The average age of men was 34.7 years (SD = 8.9) and 28.1 years (SD = 6.9) for women. Several factors affecting exposure to the campaign were studied. Comparisons were made between radio, TV, and IPC exposure.

Mothers who reported i) higher wealth, ii) being the primary decision-makers in the home, iii) receiving support from their husbands, iv) frequent access to radio and TV and, v) ownership of a cell phone, were more likely to report exposure to the mass media component of the communications campaign. Contrarily, the same factors were not predictors of exposure to the IPC component. Fathers who reported: i) higher wealth and education, ii) ownership of a cell phone, iii) recently listened to the radio, iv) that the mother made the decisions in the home and v) helping at home, were more likely to be exposed to the mass media component. 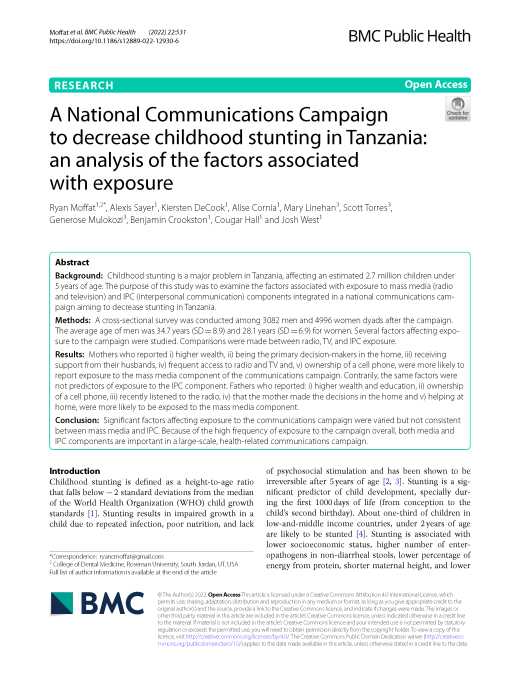