Mass Distribution Campaign of Long-Lasting Insecticidal Nets in the Democratic Republic of Congo from 2018 to 2021 in the Context of the Emergence of COVID-19: Results and Lessons Learned

Mass Distribution Campaign of Long-Lasting Insecticidal Nets in the Democratic Republic of Congo from 2018 to 2021 in the Context of the Emergence of COVID-19: Results and Lessons Learned

Introduction: The DRC had planned 23 mass distribution campaigns distribution of long-lasting insecticidal nets (LLIN) for the years 2018-2020, the implementation of which spanned from 2018 to July 2021. This article reviews the campaign’s planning process, the results, challenges, and lessons learned.

Methods: A descriptive method was used to postpone the planning and implementation process according to the National Malaria Control Program (NMCP) standards adapted to the COVID-19 context. The changes and adaptations implemented as well as the challenges encountered are described.

Results: Between January 2018 to June 2021, 23 LLIN mass distribution campaigns were organized in the DRC with the financial support of The Global Fund to Fight against Tuberculosis, AIDS and Malaria (GFTAM) and Against Malaria Foundation (AMF) allowing the distribution of 55,273,473 LLINs to 19,048,372 households at risk of malaria transmission with an average of 2.9 LLINs per household. The enumerated population (111,081,191) exceeded 7% of the micro plans projected population (102,790,391) while the number of households enumerated (19,311,629) was 3% lower compared to the micro planning projection households (19,862,417). Compared to a reported household coverage of 96% of households achieved over the expected households, the independent monitoring carried out revealed 91% of households served in the intervention areas. The main reasons for not reaching households mentioned by the respondents were absence at the time of distribution (26%) followed by the loss of vouchers (16%). Several communication channels were used among which, community workers were the most frequently mentioned (63.1%), followed by radios (18.5%) and churches (12.4%).

Conclusion: Good planning, effective coordination of stakeholders, and revision of the implementing campaigns methods following the COVID-19 were factors in the success of this campaign. An effort to respect the schedules for renewing LLINs in households, coupled with good continuous distribution, is necessary to maintain the gains and hope for an impact in terms of morbidity and mortality reduction of malaria. 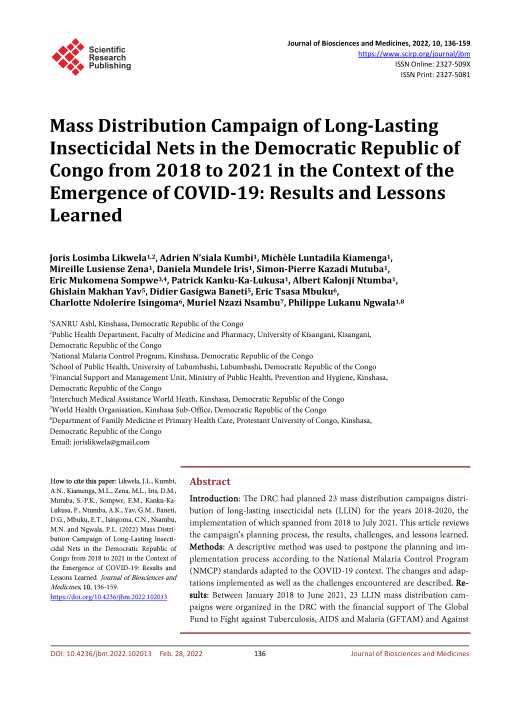