Anemia and underweight among women are major public health challenges. Access to health services can improve dietary behaviors and women’s nutritional status. We examined whether exposure to health services is associated with women’s dietary practices in Tanzania.

Data come from a cross-sectional baseline survey among 5000 female primary caregivers who were randomly selected via two-stage sampling, prior to implementing a maternal and child nutrition program. We ran frequencies on women’s exposure to existing health facility-based counselling, community health worker visits, and attendance at women’s support groups. We examined associations between exposure to these interventions and maternal diets and adjusted for sociodemographic covariates using ordinary least squares regression and ordered logistic regression.

A third of the sample (34.1%) had received any antenatal care (ANC) during their most recent pregnancy or had been advised by anyone about nutrition (37.0%). 68.0% had never had a community health worker (CHW) speak to them about their children’s health and 9.4% had participated in a women’s group. Only 8.0% of mothers ate more than usual during pregnancy and 7.1% ate more types of foods. After adjusting for mother’s age, education and household assets, women who received nutrition advice were 1.3 times (95% CI: 1.1, 1.7) more likely than mothers who did not to eat more during pregnancy. Receiving antenatal care (ANC) and advice on nutrition before, during, and after pregnancy and delivery were highly associated with the mother eating more types of foods. Hearing from a CHW about children’s health but not support group attendance was often associated with various dietary practices. Almost all measures of access to health services were significantly associated with mothers’ frequency of eating in the previous 24 h. Receiving advice on nutrition during pregnancy and after giving birth and CHW contact were associated with mothers’ dietary diversity in the previous 24 h.

Several program exposure variables—especially being counselled about nutrition—were associated with improved dietary practices. Improving service delivery at scale may contribute to improved dietary behaviors in larger populations, given the associations we describe, along with findings from the existing literature. 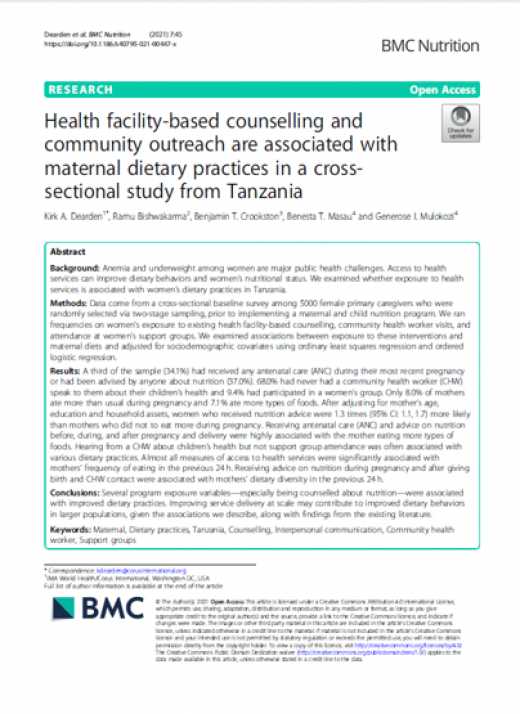