ven in an era where so much of the sound reaching our ears comes from satellites and mobile devices, radio remains the medium with the world’s widest reach. The U.N. estimates 3 out of every 4 homes in the developing world have access to a radio. And with more than 44,000 radio stations spanning the globe, traditional broadcast radio remains an influential way to spread important messages.

IMA World Health uses radio to promote messages that foster health, healing and well-being. In Indonesia, radio broadcasts can reach across whole islands in the world’s largest archipelago. The Gizi Tinggi Prestasi campaign, managed by IMA World Health and funded by the Millennium Challenge Account – Indonesia, uses radio and other media to promote practices like diverse diets, proper sanitation and hygiene and breastfeeding for children under age 2.

Listen to a jingle that aired in Indonesia: 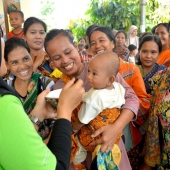 Update Required
To play the media you will need to either update your browser to a recent version or update your Flash plugin.

Radio reaches households in Tanzania as part of the ASTUTE program. IMA World Health works to improve nutrition in all districts of five regions of the Lake Zone—Kagera, Kigoma, Mwanza, Geita and Shinyanga—representing a collective population of 10.2 million and more than 750,000 stunted children. In an area with some of the country’s worst malnourishment rates, radio bolsters efforts to reach 3 million mothers with the hopes of helping a generation avoid the life-long effects of stunting.

Listen to a radio spot that aired in Tanzania: 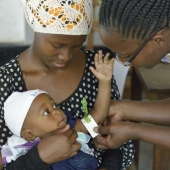 Update Required
To play the media you will need to either update your browser to a recent version or update your Flash plugin.

Changing a community’s behavior to embrace healthier practices is not an easy task. While comprehensive approaches work best and require years of repetition, radio remains just as critical a tool to spread the word as it has for decades.

Founded in 1960, IMA World Health is a global, faith-based nonprofit that works with communities to overcome their public health challenges.