The head nurse at a health center in Kalonda Oest uses the computer at the central office of the health zone to enter data into DHIS2.

In the Democratic Republic of Congo (DRC), IMA World Health advances the transformational power of data through our long-standing work to implement health information systems.

Two decades ago, the DRC's Ministry of Health had been using a paper-based system to collect health statistics at the facility level, known locally as SNIS, but this data was aggregated only once per year. Annual data collection makes health programming extremely difficult. Responding quickly to health emergencies, like Ebola or cholera, requires coordination at a national scale with immediate information. To advance responsive programs that could reduce the burden of disease, they would need a more rapid and reliable stream of data to inform decision-makers at the national level.

IMA World Health’s mission to digitize routine data began in 2006 when it was one of a few organizations that aided the government’s transition from its paper-based information system to a digital platform known as GESIS, which, in English, stands for Health Information System Management. Unfortunately, restrictions within GESIS made it difficult to make modifications to add new health zones, change populations, or evolve indicators and targets. GESIS quickly began to lose favor throughout the country for its inefficiencies and inability to produce rapid and quality data. Ten years after its inception, only 35 percent of the country had implemented GESIS.

In 2009, IMA World Health pioneered the implementation of the District Health Information System (DHIS) 1.4. DHIS is an open-source software program that is free to use and is now operating in 73 countries. Within six months, the IMA-led Integrated Health Services Project (Project AXxes) had successfully customized the software’s reporting system to the DRC’s SNIS, installed and adopted it province-wide in South Kivu’s 28 health zones, and began to effectively utilize the system. Implementers at all levels were pleased with the ease of implementation, the rapid processing of data, and the resulting improved data quality.

Five years later, we implemented the updated version, DHIS2, in 52 health zones during our Access to Primary Health Care (ASSP) Project and, in 2015, the rest of the country followed suit. IMA World Health led a consortium of partners that banded together to implement the system in every health zone across the nation. Health centers were connected to the internet via VSAT satellite transmission and 3G mobile networks. Hundreds of health zone central offices were outfitted with computers and thousands of health care workers were trained on how to complete the monthly reports and enter the data into the DHIS2 platform.

An IMA staff member installs a VSAT dish in Kananga during IMA World Health’s ASSP Project in 2014, connecting the central office of the health zone to the internet for the first time.

Today, most health centers, even those located in the furthest reaches of the country, are now submitting monthly reports. Health workers across the nation are reporting on indicators like the number of births and birth complications, patient consultations they received, cases of disease, deaths from malaria and the number of vaccines delivered to children in their communities. Hundreds of indicators are now captured every month.

DHIS2 has allowed us to respond to health care needs in the DRC more rapidly than ever before. For the first time, we can track maternal mortality monthly. We can see the real and profound impact of our health systems strengthening in the DRC when we look at the case fatality rate for mothers during the five days after birth, which is reported nationwide in DHIS2. The numbers are on average five percent lower in the health zones where we have worked compared to the rest of the country.

An example of DHIS2 data analysis can be illustrated through our work to combat malnutrition. Within minutes, program staff in the DRC or in Washington, D.C. can login to DHIS2 and pull up data showing the prevalence of malnourished children in our project health zones at the start of our Access to Health Systems Support (ASSR) Project from 2019 to present, six months after ASSR ended. Moments later, we can calculate an average of this data and see that we achieved a 65 percent reduction in the prevalence of malnutrition in the health zones where we worked, which is illustrated in Figure A. If we separate this data out by province, illustrated in Figure B, we can see that two of the provinces have maintained a steady decrease in malnutrition even after the project ended. However, one province, Kasai, is back on the rise. We have more work to do there. 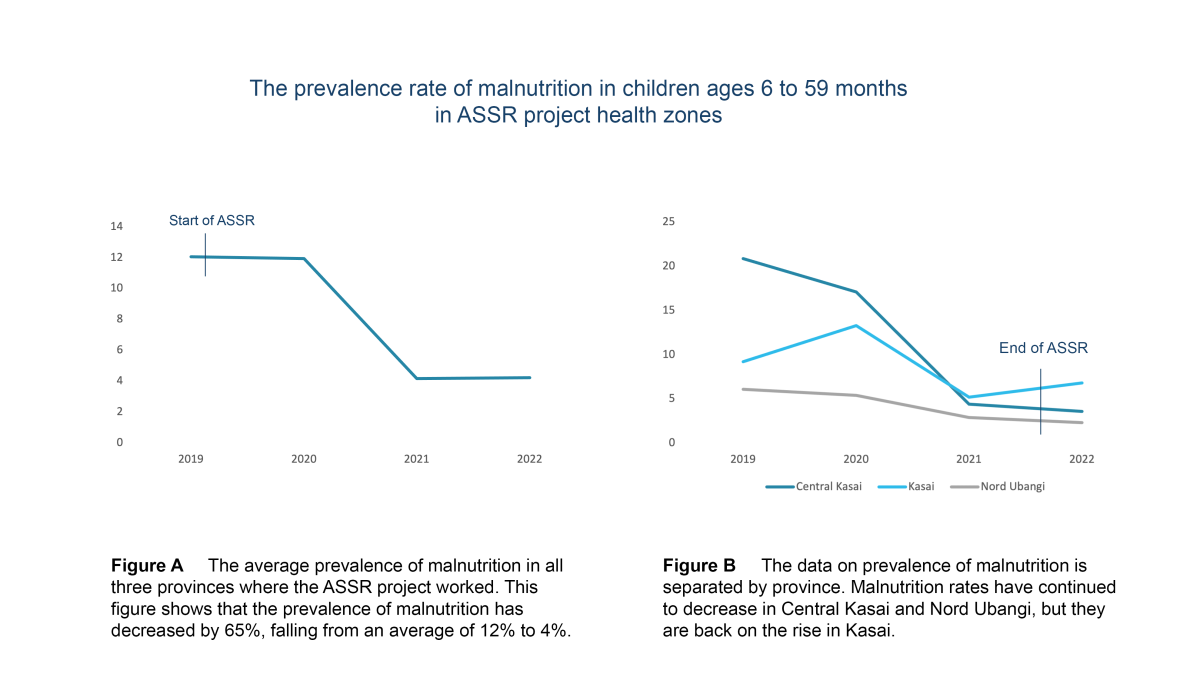 IMA World Health will not stop our work to strengthen health systems until there is health and well-being for all. By leading DHIS2 implementation and collaborating with local partners across the DRC, we are seeing the incredible power of health data in action.

This blog was compiled by Crystal Stafford, Communications Officer for Central and East Africa.