In honor of World NTD Day and the launch of the World Health Organization's new Neglected Tropical Disease Road Map, IMA World Health is pausing to acknowledge the hard work and partnership that has helped to bring the global goals for controlling and eliminating NTDs ever closer. As each milestone is achieved, there is cause for celebration: soon, hundreds of millions of people will be able to live healthier and more prosperous lives, free of NTDs. 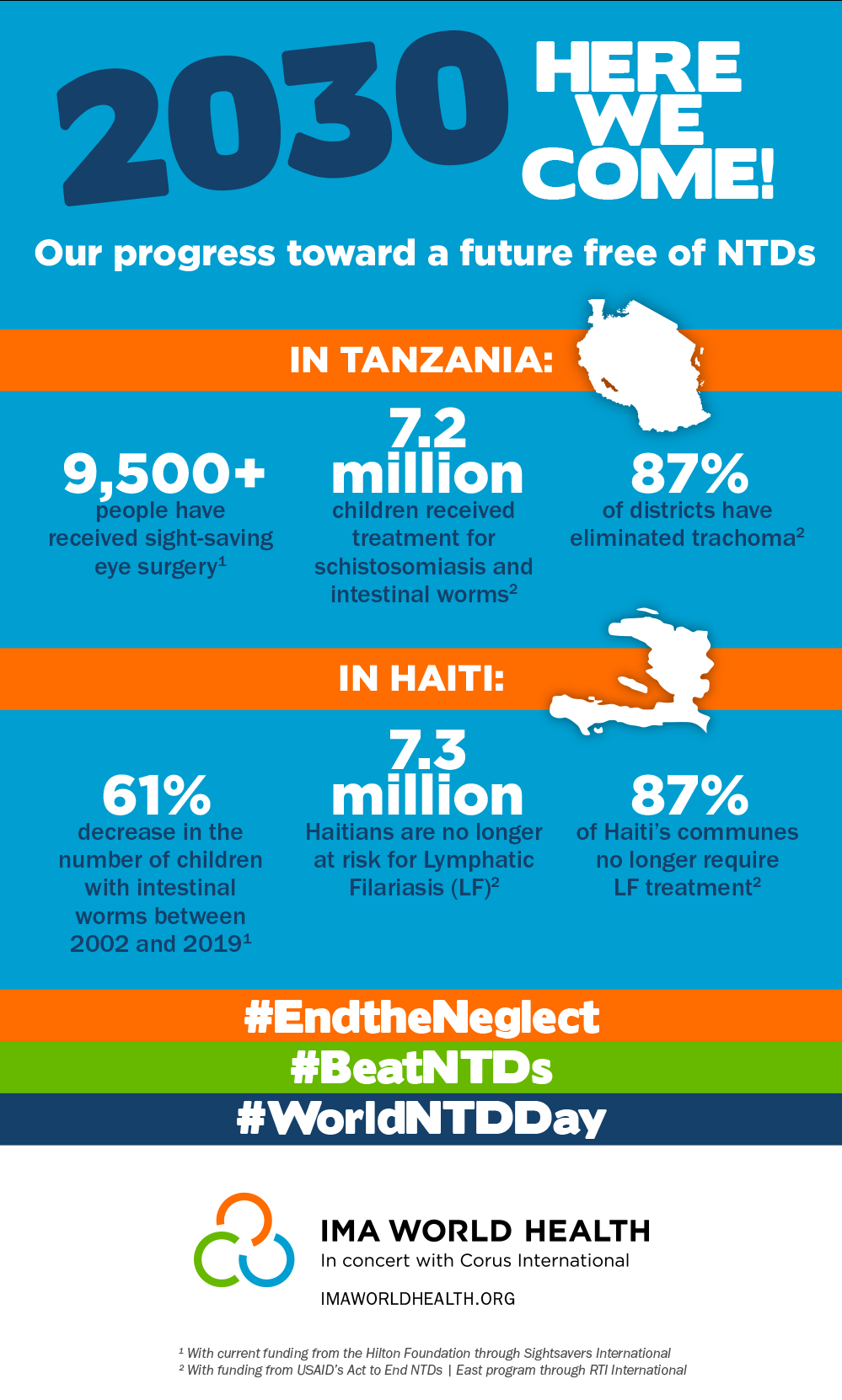 IMA has supported NTD control programs for more than two decades, often overcoming significant challenges — including the current global coronavirus pandemic — to stay the course. But partnerships between donors, governments, implementers and communities are strong, and IMA is confident the collaboration that has carried us this far will keep us on track to meet the new 2030 control and elimination goals.

Haiti: 87% of the way to LF elimination

Lymphatic filariasis and soil transmitted helminths are the two preventive chemotherapy NTDs endemic in Haiti. In 2001, in line with WHO's global LF elimination goals, the Haiti NTD Control Program set a goal to eliminate LF and control STH by 2020. Accomplishing this would require preventive chemotherapy, in which a dose of medicine is administered once or twice per year across the target population, over the course of several years.

When these efforts began, approximately 11 million people required preventive treatment for LF across all 140 communes. By 2012, the program reached 100% geographic coverage for mass drug administration — a massive feat of coordination and partnership. Since then, Haiti has made incredible strides toward its goals and has seen a significant decline in LF and STH prevalence.

Additionally, STH prevalence among school-age children has significantly decreased thanks to program efforts, from 37% in 2002 to 14.5% in 2019 — resulting in better health, nutrition, school attendance and achievement for hundreds of thousands of children.

The Haiti NTD Control Program’s accomplishments have been made possible by funding and technical support from the U.S. Agency for International Development through the previous ENVISION project and current Act to End NTDs | East program, with IMA World Health as lead implementing partner in Haiti, RTI International as the prime award recipient, as well as the University of Notre Dame, The Carter Center, the U.S. Centers for Disease Control and Prevention, Task Force for Global Health, the Pan-American Health Organization and GlaxoSmithKline.

IMA supports control and elimination efforts in Tanzania with mass drug administration through the USAID Act to End NTDs | East program, facilitating mass drug administration annually in 19 regions and 134 districts across the country. With funding from the Hilton Foundation, IMA also facilitates sight-saving surgeries for people whose vision has been affected by trachoma infection.

Progress toward control. Controlling SCH and STH continues to be very challenging. However, between IMA's partnership with the SCI Foundation and efforts on the USAID Act to End NTDs | East program, 7.2 million school-aged children (of the 7.6 million targeted) received treatment for STH and SCH in 2020 in 134 districts — a coverage rate of 95%. This means better nutrition, health and school-readiness outcomes for these children and their families.

Sight-saving surgery. IMA also facilitates eye surgery for individuals suffering from complications of trachoma (referred to as trachomatous trichiasis or TT) in endemic regions of Tanzania, under the WHO-endorsed SAFE program. IMA is part of a consortium of implementing partners led by Sightsavers International and in partnership with the Tanzania NTD Control Program. Those affected by TT — a majority of whom are women due to their caregiving responsibilities and repeated exposure to the disease in children — receive a simple surgery on one or both eyes to stop the progression toward blindness. In 2019, IMA’s efforts to conduct case finding, screening and surgical services resulted in nearly 4,000 surgeries. In total, the program has conducted 9,560 surgeries. Though the COVID-19 pandemic has paused program activities, IMA is committed to resuming full the pace as soon as possible.

With these significant achievements, IMA — with collaboration and support from donors, partners and communities — is proud to be on track with the WHO NTD Road Map, in pursuit of health, healing and well-being for all in world free of NTDs.