Four-year old Nyakuoth's mother was concerned; her baby girl had been experiencing vomiting, diarrhea, lethargy and a poor appetite for several weeks. The family lives in the village of Guadit, five kilometers west of Bajack town center in Jonglei state of South Sudan, where since 2014, IMA World Health (IMA) has run an outpatient treatment center through the IDP Emergency Medical Care Response project.

During one of the project’s weekly outreach visits to nearby villages in the nutrition catchment area, a nutrition officer screened Nyakuoth and many other children in the village for malnutrition. Project staff used MUAC tapes, which measure upper-arm circumference to indicate the nutritional status of a child or adult. Nyakuoth’s MUAC measurement was 95 millimeters, and she weighed only 11 pounds — putting her in the zone for severe acute malnutrition. Project staff brought her to the outpatient treatment center in Bajack, where they discovered that the malnutrition was causing other medical complications. Nyakuoth also had edema, anemia, a respiratory tract infection and a fever of 102 degrees Fahrenheit (38.9 degrees Celsius).

Nyakuoth and her mother were admitted to the stabilization center in Padek, run by IMA partner Christian Mission for Development (CMD). During their time at the stabilization center, Nyakuoth’s mother received training on hygiene, sanitation, proper breastfeeding techniques, nutrition and gardening. The family also received therapeutic dietary supplements including enriched flour, pulses and sorghum to nurse the child back to health.

After three weeks, Nyakuoth weighed 21 pounds and her MUAC measurement increased to 114 millimeters. In addition, all the medical complications that she had been experiencing from her malnutrition had resolved drastically. The family was able to be discharged.

"I couldn’t believe that my four-year-old daughter could come back to life. This is unbelievable, but now I am convinced that there is nothing more important than the treatment in the facility, which resulted in alleviating the suffering of my daughter from malnutrition," Nyakuoth’s mother said, expressing her happiness to have her daughter restored to health.

Nyakuoth’s family are internally displaced persons (IDPs) from Ayod town, part of a vulnerable population who often lack stable access to health care. Since 2014, through a grant funded by the United States Agency for International Development’s Office of U.S. Foreign Disaster Assistance (USAID/OFDA),1 the IDP Emergency Medical Care Response Project provided vital primary health care services to IDP and returnee populations through nine mobile clinics and outreach sites in the Greater Upper Nile and Jonglei regions. As these populations reintegrated into communities project interventions improved their nutritional status through prevention and treatment of malnutrition with an emphasis on the most vulnerable. The project ends this year, after six years of lifesaving work.

The overall vision of this project was to provide a comprehensive and holistic set of services to address the populations’ urgent needs. In addition to providing services such as disability and trauma referral, screening for gender-based violence and psychosocial needs and immediate primary health care, IMA also provided nutrition services focusing on children under five years of age, pregnant or lactating women and other vulnerable persons through prevention, screening and treatment of acute malnutrition to reduce morbidity and mortality. In order to build local capacity to ensure continuation of care after project close, IMA worked in coordination with local partners Christian Mission for Development, Nile Hope and the John Dau Foundation, as well as the State Ministries of Health, County Health Departments and the leadership of Malakal, Fashoda, Manyo, Pigi, Fangak, Ayod and Duk counties.

One of the project-supported mobile clinics, Nyanapal Mobile Clinic, provided health and nutrition services to more than 11,000 IDPs and more than 10,000 members of the host population in Ayod county. Most of the IDPs are originally from the towns of Ayod, Bor, Duk, Wau and Kwachdeng. In 2016, violence erupted throughout South Sudan and many were forced to flee their homes, eventually settling in this remote area where they could escape from the fighting. However, there was no provision of health care in the area, adding to the difficulty of living in such a remote place.

IMA, along with other partners working in Ayod county and a representative from the County Health Department who was leading the Emergency Health Mobile response, conducted an assessment tour of medical facilities in the area to assess and address resource gaps. IMA found that many of the clinics in the area needed additional medicines to be able to treat common and critical illnesses. The needed medicines were procured with support from IMA and USAID/OFDA. IMA was able to deliver the medicines via charter plane to Jiech, which is another seven hours’ journey from Nyanapal. Once the medicines arrived in Jiech, IMA used local transporters who carried the medicines on foot to ensure their arrival at the Nyanapal Mobile Clinic. IMA delivered enough medicine so that the clinic would be well-stocked throughout the rainy season, when transportation becomes even more difficult due to annual flooding.

1 In 2020, the USAID Offices of Foreign Disaster Assistance (OFDA) and Food For Peace (FFP) merged to become the USAID Bureau for Humanitarian Assistance.

The overall vision of the IDP Emergency Medical Care Response project was to provide a comprehensive and holistic set of services to address the urgent needs of the population. 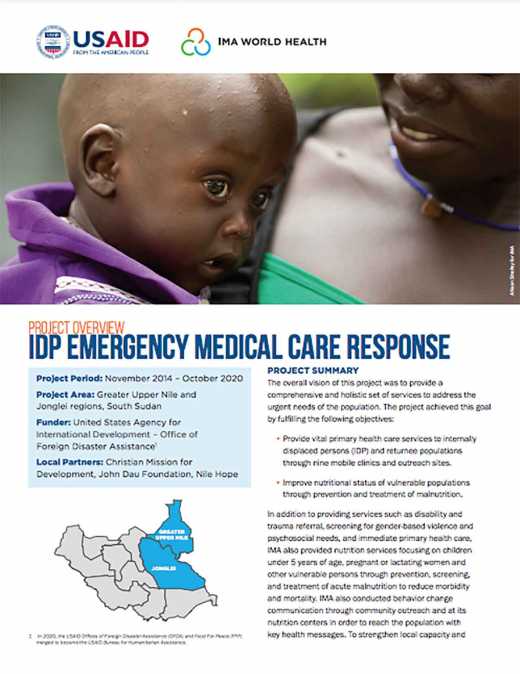