Along with thousands of others across Maryland, our staff just celebrated our first Purple Friday of the season. We have a long-running office football pool, and each week a miniature traveling statue of Edgar Allan Poe — clad in a Ravens jersey — rests on the winner’s desk as a trophy.

Though we haven’t converted every employee into a tried-and-true Ravens fan, one thing we all agree is we’re pleased the Ravens coaching staff took swift action to terminate Ray Rice’s contract following Monday’s release of the video showing Ray Rice assaulting his then-fiancee in February.

IMA World Health, based an hour’s drive from M&T Bank Stadium, has a special imperative to end violence.

We manage a USAID-funded project in Eastern Congo dedicated to the prevention of and response to sexual and domestic violence, primarily against women. We support victims and survivors to get the holistic medical care and counseling they need and work with communities to promote gender equality. We are also the lead organization behind a coalition called WeWillSpeakOut.US — a group of faith-based organizations and individuals calling for the end of this violence here in the U.S.

Why would an international health organization get involved in U.S. issues of sexual and domestic violence? Because we could rarely talk about our work in Eastern Congo in churches, schools and other forums without someone (often multiple people) coming forward with their own painful story of abuse or violence. Violence takes an immense toll on a victim’s physical, emotional, mental and spiritual health.

And violence is an epidemic in this country. According to the US Centers for Disease Control and Prevention, about 1 in 3 women in the U.S. will experience sexual violence, intimate partner violence or stalking.

NFL Commissioner Roger Goodell knows Ray Rice was not the first NFL player to commit a violent offense and that the league can do much more to set a positive example. We applauded his recent admission that he “didn’t get it right” when he originally gave Rice a two-game suspension and his announcement of harsher penalties for domestic violence and sexual assault offenders. This is a positive step in affirming that aggression is not acceptable off the football field.

But I think we should take it further.

Save the image below. Make it your Facebook profile photo.

Every October, NFL players across the league wear pink to raise awareness and funds for breast cancer research. We love the idea of using such a large platform to raise awareness, particularly among men, of health issues that primarily affect women.

But at the same time, October also happens to be Domestic Violence Awareness Month — an issue that often gets drowned in the sea of pink.

According to cancer.gov, about 1 in 8 women will be diagnosed with breast cancer at some point in her life. Almost three times as many women will suffer from sexual or domestic violence. We don’t intend to minimize the devastating impact of breast cancer, but instead to raise the profile of sexual and domestic violence and the lasting negative effects it has on both women and men alike.

Every act of domestic violence or sexual assault is committed by someone who makes a decision to harm, humiliate, shame or overpower another human being. Now is the perfect time for the NFL to use its clout to speak out against sexual and domestic violence among its millions of fans.

The Ravens, in particular, are in the spotlight today, and they have the opportunity to shine a brighter light on the problem of violence. They’ve already started by releasing Ray Rice. Now is the time for the Ravens to own this issue.

After all, the Domestic Violence Awareness ribbon is purple. 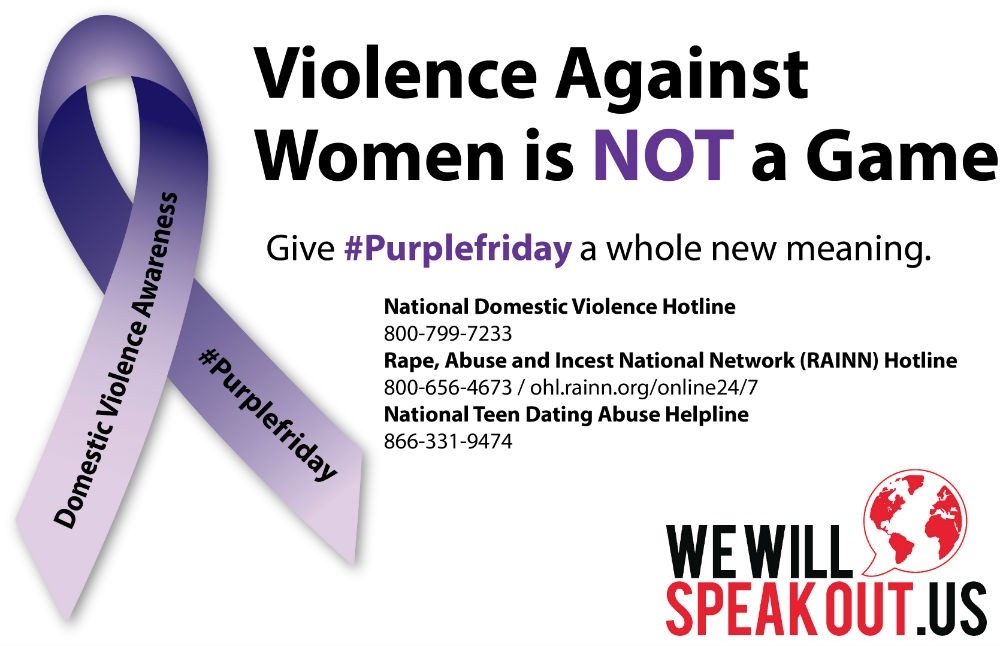