Students who attend The National School of Lavanneau near Jacmel, Haiti, wash their hands before eating lunch on May 5, 2016. They spent the morning singing songs, reciting poetry and performing demonstrations about proper sanitation and healthy hygiene. Lavanneau is one of 60 schools where IMA World Health, with Episcopal Relief & Development funding, is improving water, sanitation and hygiene through Healthy Schools, Successful Children project. (IMA World Health/Kara Eberle)

A celebration for handwashing makes smiles in Haiti

ackensia Joseph knows she needs to wash her hands after she uses the latrine at home and at school. The 11-year-old girl understands that she could catch a disease, such as cholera, if she doesn’t.

It’s a lesson that was reinforced during the WASH Fun Day on May 5 at her school, the National School of Lavanneau in Jacmel, Haiti. The event included plays, poems and songs about the importance of safe water, good hygiene, proper sanitation and a healthy environment for everyone’s health.

“What do you do after you use the bathroom?” one group of students sang in Creole.

“Wash your hands!” the rest of their 360 classmates shouted in response. Lavanneau is one of 60 schools that will be improved through Healthy Schools, Successful Children project, or Sante nan lekol, se Sikse Timoun yo in Creole. The project, which began in September 2015 and continues through March 2018, is funded by Episcopal Relief & Development and is being implemented by IMA World Health.

The goals of the project are to improve students’ health, school participation and academic success through water, sanitation and hygiene—often referred to as WASH—interventions in the South, Southeast and Grand Anse departments in Haiti. The objectives include improving infrastructure in schools by building latrines and handwashing stations; improving behavior among students, teachers and communities; and building frameworks that enable schools and the community to sustain the progress and maintain the infrastructure.

The longer-term hope is that, by working in schools, good hygiene practices will be absorbed by the wider community. 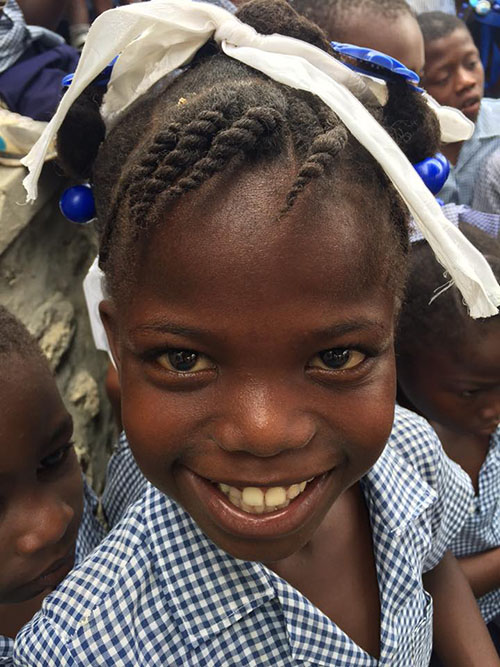 Mirline Pantaléon, who is 10, flashes a smile for the Rev. Amy Gopp, IMA's Vice President of External Relations, during the event. (IMA World Health/Amy Gopp) 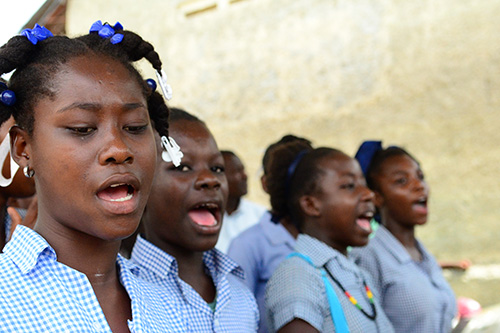 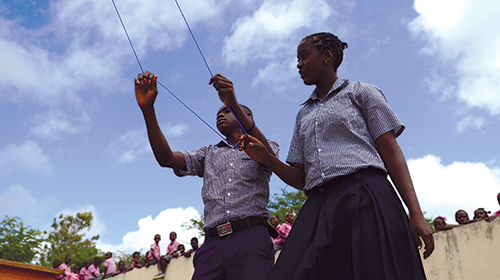 The event began with the singing of the National Anthem and the raising of the flag. (IMA World Health/Matt Hackworth)

The Caribbean country known for its music and indomitable spirit continues to struggle with a lack of access to safe drinking water and proper sanitation. Nearly 40 percent of the population lacks access to improved sources of drinking water and just 26 percent of the population has access to improved sanitation facilities, according to a 2014 UNICEF report on the state of the world’s children. The situation in schools is even more alarming. More than 74 percent of schools lack water installation and 84 percent lack treated drinking water, according to a Ministry of Education report. Fewer than 60 percent of schools have functional toilets or latrines, the report states.

What does that mean?

It means thousands of Haitians have to travel miles, usually on foot across rocky and mountainous terrain, to get to water. Often that water isn’t safe to drink. And it’s usually up to young girls, like Mackensia, to fetch the water for their families, which can interfere with their opportunity to go to school. Mackensia said she carries two, 2-gallon jugs on her 15-minute journey, one-way, to get water for her family. 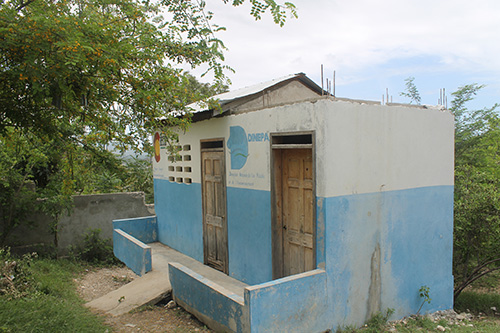 These latrines will be improved through the Health Schools, Successful Children project. (IMA World Health/Jennifer Bentzel) 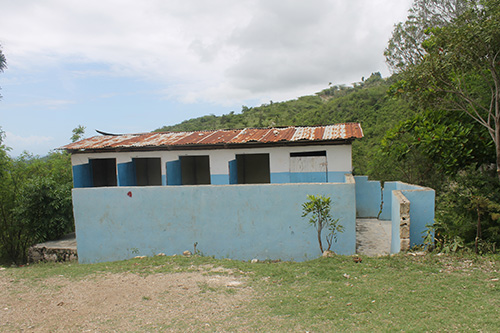 It means their bathrooms are latrines that are nothing more than holes in the ground. There’s no toilet paper and no seats. Boys likely don’t even use latrines and urinate outside instead. In some cases, boys aren’t taught to use a latrine. It’s a situation the IMA Haiti team is working to change, and the WASH Fun Day was just one of the activities they have planned to improve health throughout the country.

Their main goal is to ensure that each school has access to a sustainable source of safe, clean water. Some schools will get hand pumps, some will get rain catchment systems and others will get reservoirs, depending on the situation. They will also make sure students have safe and improved latrines to use. In some cases, this means they will tear down existing structures and replace them with new ones that include seats and proper ventilation. The team will also train school directors and teachers to implement WASH education in their classrooms, and encourage students to form school health clubs to promote healthy WASH behaviors.

The school spent a month putting together the WASH event, which included every class in the school. Staff members, including Principal Saint Juste Michel Pierre, also participated. One duo performed a hip-hop song about proper sanitation that got all the students on their feet. They clapped along, energized by the lyrics that included when to wash hands and why they shouldn’t litter. Their song also recognized Allison, a 13-year-old girl who donated her wish to help their school through Make-A-Wish® Alaska and Washington.

Another group acted out a funeral for someone who had died from cholera. The performance included many somber, though important, messages, including why it’s not safe to have a burial within 50 meters— about the width of a football field— of a water source.

Students were rewarded for their participation. Dr. Oxiné asked questions and volunteers joined her on the makeshift stage to share the correct answer. Their prize was a bag filled with pencils and hygiene-related items.

Near the end of the program, other volunteers were asked to head to the stage to demonstrate proper hand-washing techniques. Then, all the students lined up – boys on one side and girls on the other – to wash their hands and receive a new bar of soap before they ate lunch.

IMA’s Vice President of External Relations, the Rev. Amy Gopp, traveled to Haiti for the event, along with other members of the team based in Washington, D.C.

“Everything IMA does, we do in partnership,” she told the students and staff. “And we’re happy for this partnership.”

By the end of May, work will begin on her school’s latrines, water systems and handwashing stations to make them safer and cleaner. When the work is done, she will have safe water to drink while she’s at school. She’ll have a place to wash her hands after using the latrine.

She’ll also have the knowledge and tools to promote healthy WASH behaviors at home and in her community, which will lead to a healthier Haiti for generations to come.

Our partners on the Healthy Schools, Successful Children project are:

Students hold Thank You signs for Allison, a girl who gave her Make-a-Wish to the school to help them be healthier. (IMA World Health/Matt Hackworth)